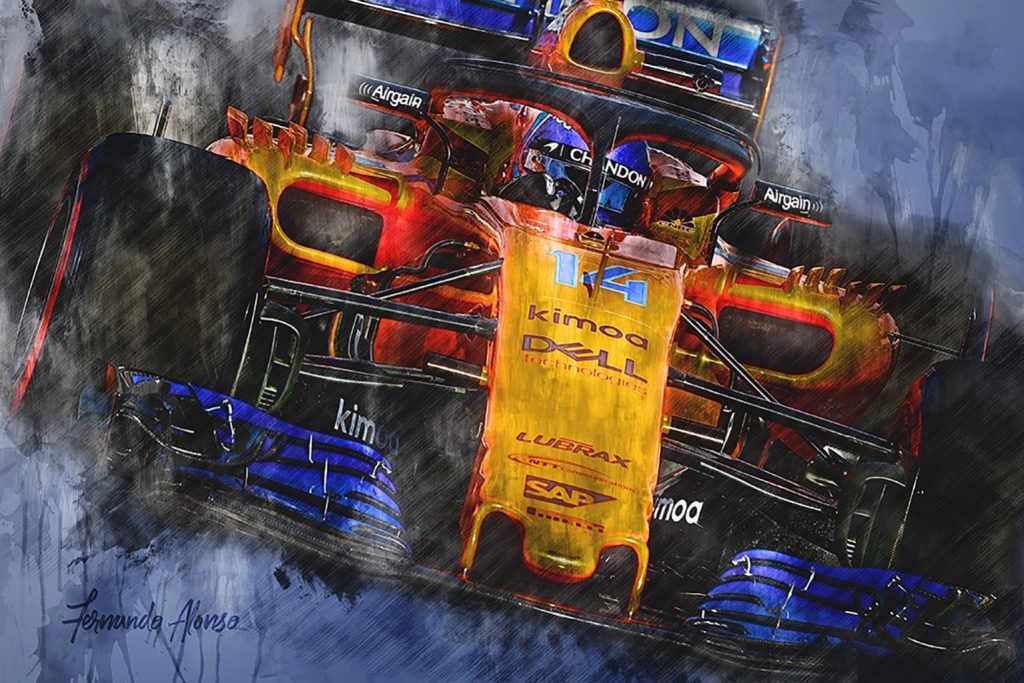 Premium quality canvas wall art featuring Formula 1’s Fernando Alonso, Team McLaren. This Fernando Alonso canvas art for the Formula 1 2018 season is the perfect gift for the motorsport fan in your life. Created and printed by Motorsport ART in Ireland.

Fernando Alonso is the man who ended Michael Schumacher’s Formula One reign, and became the then-youngest champion in F1 history. A second consecutive crown was confirmation of his brilliance, and with Schumacher retiring, Alonso seemed certain to replace him as the sport’s dominant superstar.

Agonisingly, no titles have followed in the intervening years. A fractious move to McLaren, and subsequent spells with Renault and Ferrari, yielded success in the form of 17 victories and three championship runner-up finishes – but not the one piece of silverware he really desires. Perhaps ironically, it has been in inferior machinery that Alonso has come to be regarded as one of the finest drivers not just on the current grid, but in history. Given his calibre, his relentless hunger and determination, there is still much to achieve…

With the horror days of Hondas problems behind them, McLarens Formula 1 efforts can now re-focus with a Renault powertrain on board, a new colour scheme and one of the best drivers behind the wheel. McLaren have had a nightmare run since teaming up with Honda back in 2015. Since then the team has failed to win a single race, or get a podium or even finish most races. What was once a very successful partnership between the two companies back in the 1980’s, turned into a bottomless pit of failed promises.

Now with a Renault built engine, McLaren can finally prove what they have saying for the past three years. That they have a chassis that can mix it with the best. One driver who will certainly get the most of the car is double world champion Fernando Alonso, who has stuck around and has another year alongside his young team mate Stoffel Vandoorne.

“The MCL33 represents a fresh chapter for McLaren – one that clearly embraces our evocative history while also serving to guide our future,” said Shaikh Mohammed bin Essa Al Khalifa, Executive Chairman and Executive Committee Principal, McLaren Group. “We may have faced a tricky last few years, but this team has demonstrated time and time again that it emerges stronger from each and every challenge. And, for 2018, it’s not merely the colour of the car that marks the change: there’s a determination and commitment that exists within everyone who works at McLaren, and we’re fighting stronger than ever to return to the front.”