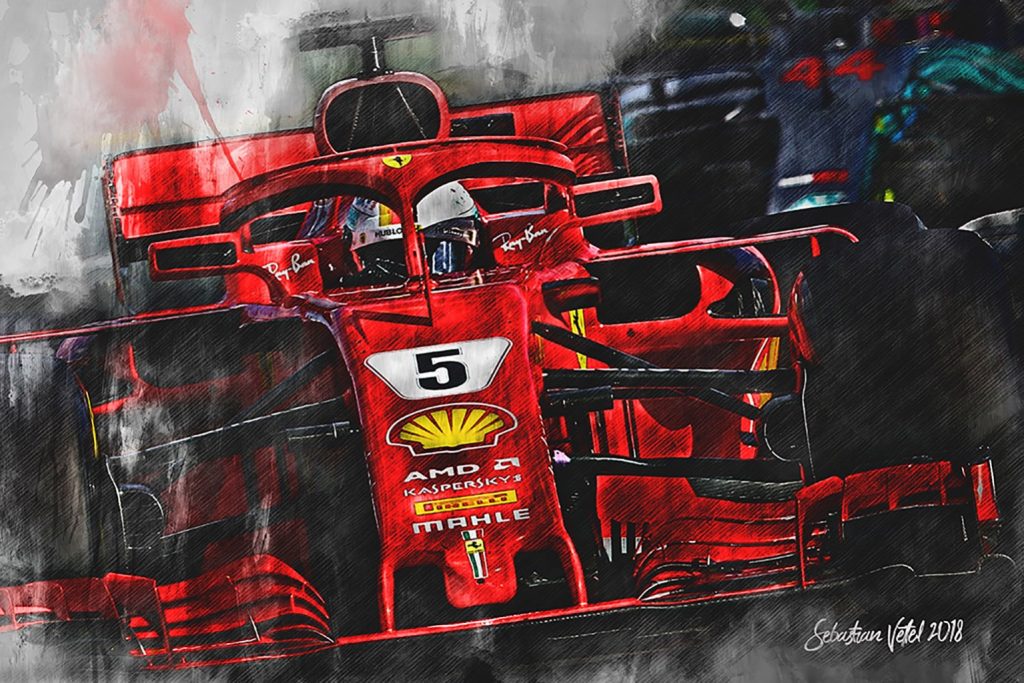 Premium quality canvas wall art featuring Formula 1’s Sebastian Vettel, Team Ferrari. This Sebastian Vettel canvas art for the Formula 1 2018 season is the perfect gift for the motorsport fan in your life. Created and printed by Motorsport ART in Ireland.

A tour de force as he swept to four straight world championship crowns and countless Formula One records, Sebastian Vettel ’s relentless hunger for victory, as much as his outstanding talent, secure his place as one of the sport’s greats.

By his mid-20s he was already the dominant driver of his era, becoming the youngest polesitter, winner and champion in history. A second, third and fourth crown, won with either remarkable tenacity or crushing supremacy, only added to his glittering legacy.

The foundations for such a remarkable trajectory were laid early on. Sebastian Vettel had been racing for more than a decade even while still a teenager, having started his career in 1995 at a local kart track in his native Germany, where he had been born in Heppenheim on July 3, 1987. It wasn’t long before he had notched up several regional championships, and bigger things beckoned. Tiring of the local competition, he began to race on a European level.

Before long he’d won the region’s junior kart title and even clinched victories at prestigious annual events in Monaco and Paris-Bercy. As he began to make a name for himself, Vettel attracted the attentions of Red Bull, who swiftly signed him up to their young driver programme in 1998.

With Red Bull’s backing, Sebastian Vettel continued to perform well and in 2000 was invited to join the Austrian drinks company’s junior team. Two seasons of karting later – still aged just 15 – he was ready to make the switch to single-seaters. Debuting in the hugely-competitive Formula BMW series in 2003, Vettel faced a tough challenge, but he didn’t disappoint, scoring five wins and ending the season second in the championship…