On his 2011 race debut, Sergio Perez Mendoza became only the fifth Mexican to make it into Formula One racing. In 2015 – four seasons and two team moves later, and with his stock continuing to rise – he also flies the flag for his nation, as Mexico City returns to the F1 calendar for the first time since 1992.

Born in Guadalajara on January 26, 1990, Sergio Perez has been a member of Escuderia Telmex, which supports racing drivers in various categories, for a number of years, enjoying a close personal relationship with Telmex Chairman Carlos Slim Domit, who has taken a keen interest in his motorsport career.

Perez began his career in karting, where he won a total of five championships, before making his single-seater debut in the US-based Skip Barber National Championship in 2004. With Telmex backing, he finished 11th overall, as well as taking seventh in the Skip Barber Dodge Midwestern series… 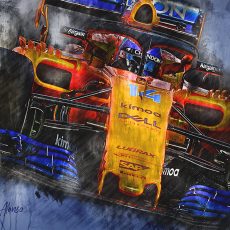