Johnny Rea – WSB Champion 2017 – is a superbike racer born in Ballymena (Northern Ireland). His sporting career began in motocross, before deciding to move to tarmac competing in British Superbikes. He competed in the national series, before making the step up into the Supersport World Championship in 2008. Rea has been competing in the top class since his first full campaign at World Superbike in 2009; where he accumulated 15 Victories, always on a Honda. 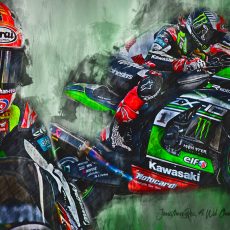